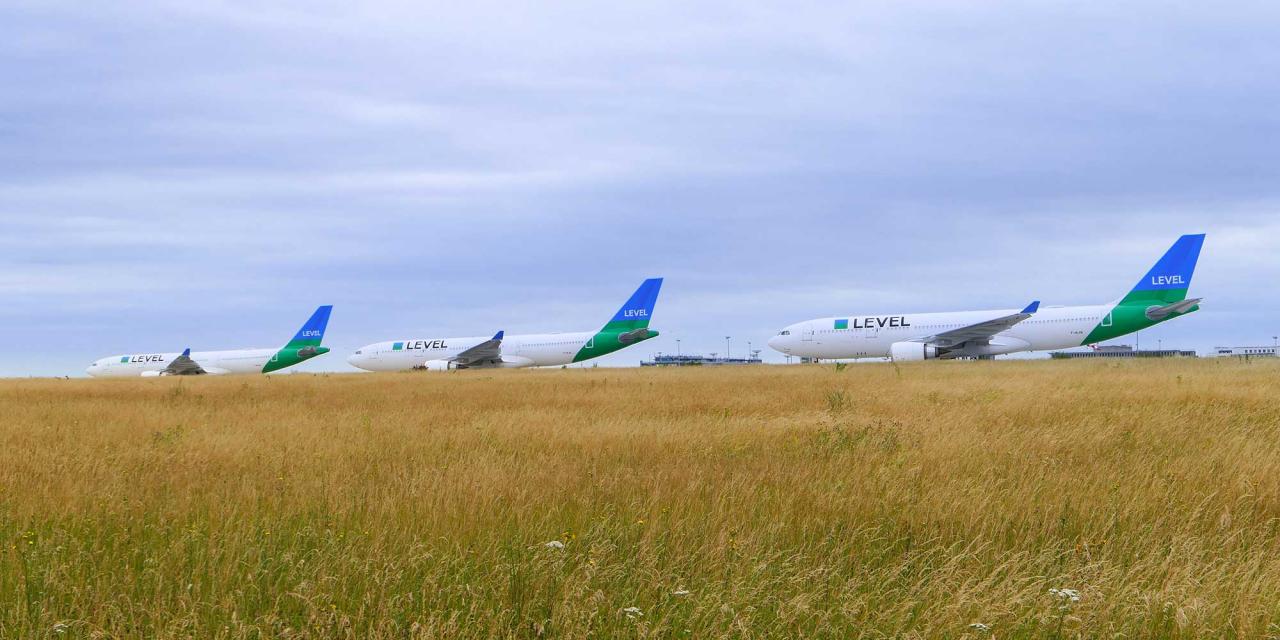 The airline Level Europe GmbH, active in the highly competitive market of low-cost airlines in Austria, has stopped operating with immediate effect. Level Europe was part of the International Airlines Group (IAG), the holding company of British Airways, Iberia and Vueling.

As of Wednesday, June 17, it was no longer possible to book flights on the website of Level Europe.

Like other local airlines Level Europe had paused regular operations since mid of March and since then only provided a few return flights organised by the Austrian Ministry of Foreign Affairs for stranded travelers abroad due to the corona crisis.

Last Friday the management of Level Europe filed a request for insolvency and on Saturday June 20 the bankruptcy procedure was started.

According to national credit reference associations the company amassed debts in the extent of € 12,3 million, sold and unserviced air passenger tickets not included in this sum.

Level´s management argues that Austrian government had not granted financial support to counter the threat to the company by enforced pandemic lockdowns as it did for the other company (AUA) based in Austria´s capital airport Schwechat.

The concerned Level  Europe staff has scheduled a demonstration against this unequal treatment at the chancellor´s office for Wednesday June 23.

Until June the company had about 200 employees in Austria, about 40 in Amsterdam, and a fleet of 6 leased Airbus 320s at its disposal.

Passengers with paid tickets have little chance to get refunds other than a small share of the ticket price unfortunately, if they file a claim at court. Contrary to package travels, mere flight bookings are not covered by a compulsory insolvency insurance and are not protected in cases of bankruptcy of airlines.

Level Europe is also unable to arrange alternative flights for customers as is stated on their website.

Long haul flights under the flight number designation of carrier FLY Level SL (another branch of the IAG group registered in Spain) are not affected by this insolvency and will be  carried out. Please check the name of the carrier airline specified in your flight documents and make sure which of the two you booked your flight with. If unsure, you are advised to contact your respective marketing carrier or travel agent for clarification.

Making a claim at court

It is worth mentioning that the fee for bringing a claim in insolvency proceedings before the court is €23. Therefore, claims for expired low-price tickets or issued vouchers are often hardly worth the trouble if they did not have a certain purchase value when issued. In similar insolvency proceedings, often only a low quota from the coke price mass of around 10% or less is achieved. This quota, which is determined by the insolvency administrator, is only calculated after all claims have been collected and can therefore be disappointing.

If affected parties wish to file their claim in the insolvency proceedings, they must submit their documents to the competent court together with proof of payment of the fee.

The official German language information on the insolvency proceedings can be found here.

Where do I register the claim?

Claims against LEVEL Europe GmbH (with the company register index FN 482069a) can be filed with the insolvency court under the file number 36 S 54/20p:

Regarding the payment of the fee of € 23,- there are two possibilities:

Attention: The form of the claim must be sent in two copies.

It is also possible to bring in vouchers issued by Level Europe GmbH as insolvency claim at the court. These are not worthless, as you can read in some places on the internet, but can be claimed after paying the registration fee of EUR 23,--.

One of Level´s main competitors in Austria, the Hungarian airline Wizz Air announced a day after Level´s insolvency that they would make an offer to concerned Level customers, in case their flights had been cancelled due to the bankruptcy. This offer promises low cost tickets for 9,99 €, if the travel will take place until July 31st 2020 making use of any of  the connections between Amsterdam - Milano Malpensa, Amsterdam - Vienna, Málaga - Vienna, Barcelona - Vienna, Heraklion - Vienna, Larnaka - Vienna, Rhodos – Vienna and if a forfeited Level Europe booking can be proved.

1.) For each passenger, a separate claim registration with the bankruptcy court is to be brought in.

2.) The court fee of EUR 23.00 must be paid for each individual claim registration.

4.) If a multiple application has already been submitted, it must be improved within four weeks by:

a.) New correct registration of claims at the insolvency court carefully and with dilligence following these instructions: at www.justiz.gv.at - BÜRGERSERVICE - Formulare - Insolvenzverfahren allgemein - Anmeldung einer Forderung, you will receive a form and if this form is not used, the claim registration must contain the information contained therein.

b.) Reference to the court fee already paid for (merely) a claim registration

c.) Payment of the court fee for further claims

5.) If you have already submitted a claim that does not meet the requirements of 4.) a.) of this announcement, an improvement must also be made by corresponding to the request according to announcement 4) a.).

6.) If this order for improvement is not fulfilled, the claim registration will not be considered.


Reason: Regardless of the type of booking or payment, each passenger concludes their own contract for transportation, which legally does not affect the contracts of other passengers on the same plane at the same time and which can each have its own legal fate.

II. Decision: The deadline for filing bankruptcy claims is extended to 28.08.2020.

III. Information on the progress of the proceedings can be called up free of charge in the "Insolvenzdatei", which is accessible at www.edikte.justiz.gv.at . Appointments and rescheduling can also be found in the "Insolvenzdatei" www.edikte.justiz.gv.at , separate loads are only issued in exceptional cases. The European Justice Portal as the central electronic contact point for the judicial area is available at e-justice.europa.eu .